By AdminPublished May 2, 2021Category Cover Story 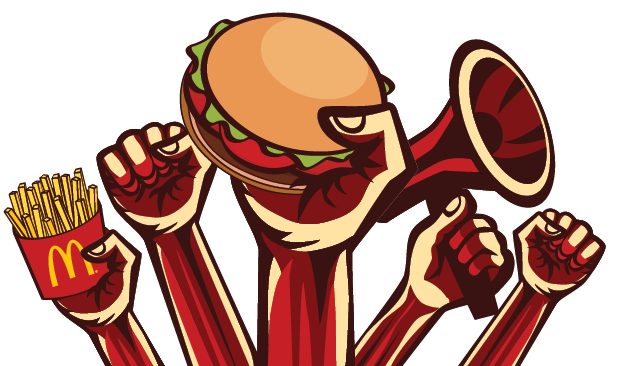 McDonald’s has been a model of consistency for most of its six decades of dominance in the quick-service restaurant world. Burgers, shakes and fries, prepared quickly – always tasting the way you expect, no matter where they are purchased – and at a price that’s easy to swallow. With the exception of its famous flops, like McSpaghetti, the Arch Deluxe and the Hula Burger, McDonald’s has consistently generated excitement and earnings—at least for its investors.

But over the last eight years, McDonald’s has felt a rumble of unrest from its franchisees, who operate over 90 percent of the chain’s restaurants. The rumble became an earthquake last December when McDonald’s informed franchisees they were about to be hit with a technology fee of approximately $12,000 per location, even as the company was ending the subsidy it paid towards Happy Meals. In a snap, McDonald’s upset the delicate balance chains franchised businesses must strike with their owner/operators. The resulting loss of trust among franchisees appears to have been building for some time and could be long-lasting. Dunkin’ owners, even those who weren’t in the system during the mid-to-late 2000s, know well that a corporate parent that acts without regard for its franchisees is bound to face resistance, distrust and ugly headlines. The drama that has played out under the Golden Arches should serve as a cautionary tale for any franchisor—particularly Inspire Brands, now that it is the second largest restaurant chain owner in the U.S.

Industry insiders who watch McDonald’s believe the chain’s current problems can be traced back to 2013, when Entrepreneur Magazine posted the headline, “McDonald’s Franchisees Are McFuming,” referring to franchise owners’ concerns that the company was prioritizing Wall St. investors. The magazine wrote, “Franchisees of the second-largest fast-food chain in the world say McDonald’s corporate is focused way too much on pleasing Wall Street and it’s causing their profits to suffer.” Franchisees were growing accustomed to funding costly renovations, even as sales were weakening. As DDIFO Restaurant Analyst John Gordon explains it, “McDonald’s has the reputation of having the most expensive equipment, expensive buildings and everything.”

But it was during the tenure of CEO Steve Easterbrook (2015-2019) – a Brit who was promoted from chief of UK and Northern Europe operations – that the franchisee/franchisor relationship really began fraying, according to Kate Taylor, a writer for Business Insider magazine who has covered McDonald’s for seven years. “Franchisees felt [Easterbrook] didn’t know the American system. He wanted to modernize and remodel stores; he brought in more technology and redesigns that were expensive, [costing] $500,000 to $750,000.” Franchisees, she says, did not believe the changes Easterbrook ordered would help generate higher sales in the stores.”

Finally, franchisees had had enough.

After relying for decades on the brand’s internal franchisee group, the National Franchisee Leadership Alliance (NFLA) – McDonald’s version of the Dunkin’ Brand Advisory Council (BAC) – to communicate their displeasure, McDonald’s franchisees did what virtually every major franchised chain had already done. In 2018, they created an independent franchisee association to promote franchise owners’ interests and protect their investments. The National Owners Association (NOA) promotes itself as a “self-funded advocacy group of ‘Owners-Serving-Owners’ on the most crucial issues.” Chief among those is spending money on things that could raise the stock price but fail to create profit for franchisees. From conversations she has had with franchisees, Taylor says a chief complaint is that “the company isn’t prioritizing what we want to prioritize and the company doesn’t understand our cash flow.”

Easterbrook, escaped with a golden parachute after evidence surfaced that he had violated company policy by engaging in relationships with employees, Later, McDonald’s filed suit against him for concealing evidence. The suit has not been resolved. During Easterbrook’s tenure, Taylor says, the number of franchisees in the system decreased. Many sold out to larger interests, creating a system that is growing heavy with corporations of multi-unit franchisees and losing family-run, single-store owners. Pre-pandemic, franchisee satisfaction had begun rebounding, according to Taylor. Then came the news last December.

“Franchisees on revolt is a franchisor’s worst nightmare. McDonald’s is reliant on good faith and good working relationships with its franchisees to get things done.”          — John Gordon

On Dec. 9, 2020, Restaurant Business Magazine featured the headline, “Franchisees Revolt against McDonald’s Higher Fees.” The article by Jonathan Maze explained that McDonald’s was moving to collect technology fees monthly, instead of twice per year and that franchisees had to make up for a three-year lag in the billing. Each restaurant owed $5076, which was being broken into 12 monthly payments of $423, on top of their new, higher monthly tech fee. The brand claimed it had intended to amend the fee structure earlier, but held off because of the pandemic.

“The NOA became furious at these new fees and claimed they had not been told about it before,” Gordon says. “Franchisees concluded they would stop talking to the corporation. It became clear that franchisees would only talk about essential matters with corporate.” That’s what led to the much-publicized – and somewhat embarrassing – story of CEO Joe Erlinger waiting 15 minutes for Ohio franchisees to join a conference call to talk about their decision to withdraw from a $1 drink promotion. None of them showed up.

“Franchisees felt pretty empowered because they had established the NOA to push back on plans that don’t help their bottom line,” Taylor says. Like Dunkin’, McDonald’s officially does not recognize the independent franchisee association. McDonald’s says NOA’s views are not representative of the franchisee community, even though it is believed more than 80 percent of franchisees are members. In the wake of the Erlinger incident, Taylor says, McDonald’s has been addressing franchisee concerns and franchisees have been easing off their silent treatment of company officials. But it is still not clear how much of a voice franchisees will have in the future.

Gordon believes franchisees have made their point and that McDonald’s has listened. “Franchisees on revolt is a franchisor’s worst nightmare,” Gordon says. “McDonald’s is reliant on good faith and good working relationships with its franchisees to get things done. If franchisees slow-walk initiatives, it means the franchisor is going to have to work harder to prove new ventures before they are implemented.”

Independent franchisee associations are important because there is strength in numbers—rendering brands powerless to punish every franchisee that participates in the organization. But predatory behavior is always a concern, as evidenced by the NOA’s published mission statement, which explicitly calls for “protection from intimidation and retribution.” Friction is endemic in the franchise industry. Because one party measures top-line sales and the other bottom-line profits, tensions can arise. It is only when each side demonstrates a commitment to collaboration, communication and transparency that the relationship works.

To restore a working relationship to its system, Gordon says “it is essential McDonald’s includes its franchisees in the work teams that make decisions. If not, it’s just a recipe for failure.” He acknowledges franchise owners must absorb some of the cost of upgrading their IT infrastructure, but such a plan has to be done fairly. Ultimately, it is up to the CEO to determine whether the company is going to take the high road with its franchisees. In his view, Inspire Brands CEO Paul Brown is not a “command and control type of leader,” like those McDonald’s has had in the past.

“Inspire should see the lesson [from the McDonald’s franchisee revolt] about having good will, being able to listen and being able to take franchisee concerns into account,” says Taylor. “If Inspire has to make changes in the model to improve profitability for both the corporation and the franchisees, these changes need to seem like a collaborative effort, not like a unilateral decision from above.”