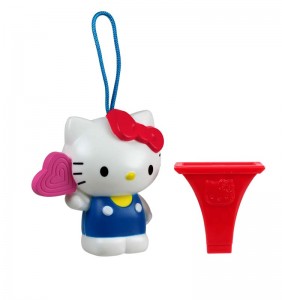 So, over the course of the past several weeks, the Golden Arches reported a drop of 30 percent in Q3 net income, along with a 3.3 percent drop in same store sales, both in the US as well as abroad.  With the hope of reversing that spiral, CEO Donald Thompson subsequently announced a reorganization and a refocus with plans to simplify the menu, remove low-selling products and grant more control to local owners over selling products catered to local market tastes.  And now, this week, the company announced that it has recalled 2.3 million Hello Kitty toys that went with their happy meals because they posed a choking risk to small children.  According to the Consumer Product Safety Commission, there have been two incidents reported to the company of children sucking the whistles into their mouths, one of whom needed medical attention!