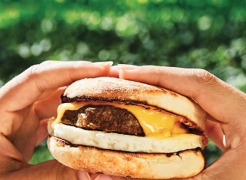 When Dunkin’ tested the Beyond Sausage sandwich in Manhattan in 2019, customer reaction exceeded expectations. The meat-free breakfast sandwich – yielding 10g of plant-based protein – became a welcome addition to the menu at 9,000 Dunkin’ restaurants nationwide. That debut into plant-based fare, along with the brand’s 2019 re-introduction of espresso, has been credited as a major factor in the chain’s 2.8 percent rise in same-store sales for the fourth quarter of 2019, the highest level in six years.

Dunkin’ holds the distinction of being the first national QSR to offer a breakfast item sporting plant-based protein, but other brands have also been dabbling in meatless fare, including Burger King, McDonalds, Del Taco, KFC, and Tim Hortons. But when Burger King recently cut the price of their Impossible Whopper – which swapped a plant-based patty for their traditional beef – restaurant brands and franchisees took note, eager to learn if plant-based protein would continue to satisfy their customers or be remembered as just a quick moving craze.

Plant-based eating encompasses foods primarily from plants, like fruits and vegetables, nuts, seeds and beans. Led by the Millennials, the number of plant-based eaters has steadily risen over the past several years, and encompass a wide spectrum: from those who strictly avoid all animal products, to fans of a more flexible but predominantly plant-based diet, to environmentally-minded eaters promoting the benefits of reduced meat production. It’s a trend that food producers are capitalizing upon. According to consumer research firm Mintel, the number of food and drink products made in the United States that use “plant-based” in their labeling grew 287 percent between 2012 and 2018.

International food and restaurant consultants Baum + Whiteman called plant-based dining “2018’s trend of the year,” stating that the consumer shift to plant-based foods is one mega-trend where “restaurants are way behind the curve.” The firm predicts that plant-based demand will continue to grow at a rate of 10 percent annually.

With interest high, it seems natural that the introduction of any faux-meat menu items – particularly those which duplicate a consumer favorite – would be met with approval. Steve Gabellieri, who owns five Dunkin’ shops around Providence, RI, observed a positive response to the Beyond Sausage debut.

“When we sample the Beyond Sausage sandwich, we get favorable reactions,” Gabellieri reports. “Some guests are apprehensive about trying the new product, but when they do, they are pleasantly surprised.”

Gabellieri reports that although initial numbers have declined – from an initial average of 15 sandwich sales a day to 12 in December to 10-and-a-half in January, 2020 – he isn’t too dismayed. “My sense is that the decline reflects the velocity of the product settling in after the initial hype and [the fact that] overall sales volume of the restaurants naturally declines in the winter months,” he says, adding, “There are a growing number of people who are moving away from meat in their diet. We need to be sensitive to that and offer alternatives for guests with changing lifestyles.”

Last summer, Burger King’s release of the Impossible Whopper was surrounded by enthusiasm. Fernando Machado, the company’s chief marketing officer proclaimed, “I have high expectations that it’s going to be big business, not just a niche product,”

Carrols Restaurant Group, a New York based franchisee company, operates over 1,000 Burger King restaurants. It reported initial sales at 32 per store per day, a number which has since dipped to – and stabilized at – 28. However, shortly into the New Year, Burger King slashed the price of the Impossible Whopper from $5.99 to a discounted two-for-$6.

While the Whopper’s price reduction is an offshoot of decreasing sales, Lizzy Freier, Senior Research Manager of Menu at Technomic, dismisses the move as an indicator of declining interest.

“The BK price reduction is due to decreasing sales, but they seem to be doubling down on efforts to market plant-based fare throughout the year, so they’re clearly not slowing down,” she states. “Price is always going to be a factor at these fast-food spots because people prioritize low prices and convenience at QSRs. So I think operators’ determining where best to price these plant-based offerings will be key going forward.”

Dunkin’ recommended a retail price of $3.99 for the Beyond Sausage sandwich and has kept that stable, In reporting Q3 2019 earnings, Dunkin’ credited the plant-based sandwich with contributing to orders averaging more than $9.

Working out the best price and the ordering patterns for new products is always tricky, notes John Gordon, DDIFO’s Restaurant Analyst and founder of Pacific Management Restaurant Group. “[Pricing is important] not only to the restaurant owner, but also to the supplier; no supplier wants to be stuck with product they can’t sell, or, run out of something very popular, like at Popeye’s,” he says referring to last fall when Popeye’s was rapidly depleted of a widely popular spicy chicken sandwich. “At this early stage, you never really know, and you just have to take a stab at amounts.”

Technomic’s Freier says restaurant owners need to keep in mind why customers turn to alternate meat choices. While they may have initially thought of “Beyond” and “Impossible” sandwiches as healthier choices, customer thinking has since shifted.

“For these products to succeed, operators really need to play up the flavor and sustainability aspect, as opposed to solely playing up the health aspect,” she says, adding that this is important in appealing to the younger customer, who may be more vested in the sustainability and environmental aspect.

Dunkin’ has clearly embraced this angle, noting in its blog sustainability is a key part of its growth. “A key benefit of the Beyond Breakfast Sausage patty is that it is more sustainable for the environment than traditional meats as it requires less water, less land, generates fewer Greenhouse Gas Emissions, and requires less energy than a beef burger to produce,” the company wrote.

In an interview with Business Insider, Dunkin’ CEO Dave Hoffmann recognized the importance of on-trend choices. “[Beyond Sausage] reaches a new customer,” he said, adding that this customer “tends to be female, younger, and likely to be a coastal resident.”

Franchisee Bill Daly, Jr., who operates Dunkin’ shops in Massachusetts and Florida, agrees there is value in meeting the market’s changing trends. “I would think [Dunkin’] will be looking at doing more with this type of item, such as healthy choice, low carb, etc.”

While everyone hopes to see quick indicators of a new product’s success or failure, it takes time to gather relevant data.

“There’s typically a 4-year cycle before we know what’s up, and we’re about a year-and-a-half into it. We need to watch who has rolled [plant-based products] out and who has taken them off the menu, and, from that, develop a profile,” says Gordon.

One factor that seems to be materializing is regional approval; Gordon confirms what Hoffmann reported, that plant-based alternatives seem to be performing better in areas with denser and more diverse populations. More rural regions appear to be lacking enough customer interest to uphold steady sales.

Appearing at the 2020 ICR conference in January, Daniel T. Accordino, CEO of Carrolls Restaurant Group, announced sales of the Impossible Whopper were “more favorable in metropolitan and urban areas, and weaker in rural areas.”

Daly agrees. “It has a specific customer, so different demographic areas do better than others.”

That strategy is driving decisions in Canada, where McDonald’s and Tim Hortons have rolled out plant-based offerings regionally. McDonald’s introduced a PLT burger (plant, lettuce and tomato) last fall at restaurants in the more populated Ontario region. Hortons, which initially offered a Beyond Meat breakfast sausage at about 4,000 locations, quickly scaled back to offer it only in Ontario and British Columbia—areas known to have a high vegetarian/vegan population.

You Can’t Please Them All

Food tends to generate strong opinions, particularly with the meat vs. non-meat crowd. Backlash from different factions has underscored the release of plant-based proteins into the mainstream. Customers have rebuked and sued Burger King for cooking plant-based burgers on the same grill as regular beef. BK responded by suggesting that patrons request special preparation, if they are bothered by such an issue.

Then there are those eaters who shun all animal products and reject less-obvious components of a QSR meal, such as mayonnaise, egg, or cheese. In their report, Baum + Whiteman addressed this thinking, suggesting that it is time for restaurant owners to stop “expecting vegans to simply remove such unwanted items from their order,” claiming this adds a sense of “deprivation” to their dining experience. Failure to accommodate these eaters, they predict, may result in a loss of Millennial and Gen X customers.

While creating a super-customizable menu may seem like an ideal way to attract the full spectrum of plant-based diners, in the end, it comes down to numbers and efficiency.

“Customization is always important to an extent, but the concern in QSRs most especially, of course, is how much that holds up the back of house,” says Freier. “Remember that the number of vegan consumers is incredibly low, and you can’t appeal to every type of consumer out there.”

Gabellieri says most guests in his shops – about 70% – have been ordering the sandwich according to the standard build. “Only 5% order the sandwich without the egg and cheese. The rest mix it up with various bagels, croissants, and other substitutions,” he observes.

On the other hand, some plant-based eaters are accustomed to using their own creativity. Youtuber Vince Lia showcases fellow vegan Jae’s method of ordering the Beyond Sausage without cheese or egg, but piling on hash browns and adding ketchup. Jae encourages viewers to “dress it up whichever way you want, bring in your own vegan cheese, sauce, etc. and put it on – it’s ridiculously good”.

Restaurant owners and franchisees may be in for a roller coaster ride as the industry determines if there’s a permanent spot for plant-based items on the menu. As issues such as pricing, region, and customer reactions go through various iterations, success may depend on observing before drawing conclusions.