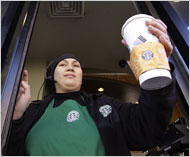 Alex Igarta, a barista, working the drive-through window of a Starbucks near the company’s headquarters in Seattle. Elaine Thompson/Associated Press

Claire Cain Miller writes in the New York Times that as the recession wears on and fewer people are splurging at Starbucks, the coffee chain’s response is to raise prices. On Thursday, Starbucks stores in several cities started charging up to 30 cents more for some specialty beverages, though the company is charging less for some basic drinks.

The price adjustments will be made at stores nationwide in coming months.

The move comes as Starbucks toes a tricky line between remaining a premium brand while retaining price-sensitive customers who can buy cheaper coffee at other shops. This summer, Starbucks has been fending off competition from McDonald’s, which has introduced a new line of lower-priced espresso drinks that have proved popular.

The price of sugary Starbucks concoctions with several ingredients, like Frappuccinos and caramel macchiatos, will increase an average 10 cents to 15 cents, but in some cases as much as 30 cents, or about 8 percent, said Valerie O’Neil, a Starbucks spokeswoman.

The price of the most popular beverages — 12-ounce lattes and brewed coffees — will decrease an average of 5 cents to 15 cents. This is the first time Starbucks has lowered prices, she said. It last increased the price of drinks by 5 cents in 2007.

“The goal of it is really to continue to find ways to balance the value we’re providing for our customers with the business responsibilities,” Ms. O’Neil said. In the three months ending June 28, sales at Starbucks stores open at least a year fell 5 percent from the same period the year before. Starbucks is also experimenting with other ways to make more money, like selling alcoholic beverages in a few stores in Seattle.

Starbucks is also trying to heighten its appeal with a redesign of some of its menus so they more prominently feature less expensive brewed coffee, and it is running a summer promotion for iced drinks.

Raising prices in the middle of a big downturn in consumer spending might not be such a crazy idea, said J. Miguel Villas-Boas, a marketing professor who studies pricing and consumer choice at the Haas School of Business of the University of California, Berkeley. Though it is paradoxical, it is a strategy premium companies often take, he said.

Connie Williams, 57, a saleswoman in Los Angeles, is one of those customers. She said the price changes would not affect her daily habit of buying a 12-ounce nonfat cappuccino “with a little shake of chocolate” at Starbucks. “I’m hooked,” she said. “It’s like asking a cocaine addict, ‘If I raise my prices, are you going to buy less?’ ”

But some customers said the price increase would make them turn away. Elise Walls, 24, a student in San Francisco, visits Starbucks nearly every day for a 20-ounce green ginger tea. On Thursday, she noticed it cost 5 cents more. “I was like, ‘Wait a minute,’ because it’s already expensive anyway,” she said. She plans to start buying boxes of tea bags and making it herself.

The sugary, creamy drinks that will now be more expensive at Starbucks are the same type of beverage that McDonald’s has been marketing in a huge advertising campaign.

Starbucks is safe raising the prices of specialty drinks because they are where the company best differentiates itself, said Kenneth Davids, editor of Coffee Review.

Mr. Davids recently published a taste test comparing espresso drinks at Starbucks and McDonald’s. The difference between standard lattes was subtle, he said, but “what surprised me was how dramatic the difference was when it got to the additives,” like syrup and whipped cream.

Starbucks customers get what they pay for, he said. “With McDonald’s, it was just terrible stuff that I don’t think anybody except maybe a 5-year-old might like.”