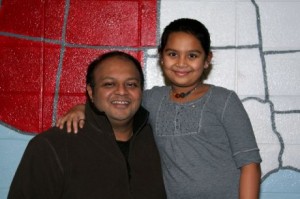 The Chicago Tribune reports that for Vishal Shah it is always “time to make the donuts,” and only the love for his family surpasses his passion for business as a Dunkin’ Donuts franchise owner. On December 15, the Glenview resident and his daughter Anjali made their television debut when CNBC featured a documentary called “Behind the Counter: The Untold Story of Franchising.” The show focused on the several franchising operations throughout the United States, including the positive and negative aspects of joining a chain.

Shah is the example of a successful franchise businessman who owns six Dunkin’ Donuts franchises throughout Chicago, and plans to open more in the near future. Anjali is a third grade student at Willowbrook School, and appeared at the end of the show with her father in his office. He was instructing her how to write a check using her “best penmanship.”

“Even though many of our payments are done online, I save a few checks to work on with Anjali. I incorporate some of what she is learning in school with the checks, like penmanship, spelling and mathematics.”

He added that Anjali enjoys working at the Dunkin’ Donuts stores, especially when she is stationed at the drive-through window wearing the headset for taking orders. It was revealed that her favorite donut is blueberry cake, while her father’s top choices include the strawberry-filled or warm glazed
variety.

In Chicago, 90 percent of Dunkin’ Donut franchises are owned by South Asians, which are comprised of two groups, Gujarati Indians and members of the Ismaili community. Shah said his father and his friend Amrit Patel went to college together and helped each other in the early days of franchise
ownership. Patel’s family now has 30 stores around Chicago.

Shah’s parents opened their first Dunkin’ Donuts store in 1977 in Skokie. After his father died in 1988, his mother took over the business. When he was a child Shah worked with his parents from 6 a.m. to 2 p.m. every weekend. After completing college, he returned to the business.

“My Parents did the heavy lifting, and I did the medium lifting,” he commented.