Open for business 10 days after the Flood with the Dunkin' Truck!

Dunkin’ Donuts franchise owner Mike White has learned what it means to tangle with Mother Nature. On September 21, after 25 inches of rain fell in a five day period in metro Atlanta, water and backed-up sewage flooded two of his Dunkin’ locations.

The situation was dire; White’s locations at 875 Towne Lake Parkway and 9755 Highway 92 had to be shut down. Employees, many of whom were personally affected by the floods, were left without any paycheck and White was powerless to do anything.

Luckily, Dunkin’ Brands had White’s back. “The Brand’s response has been unbelievable,” said White, a franchise owner since 2002. “Without even telling me they put together a plan to help out.”

“This is just the kind of thing the Supertruck is designed for,” said Andrew Mastrangelo, Manager of Media Relations for Dunkin’ Brands. “It left Massachusetts and made it to Mike’s location in about two days, thanks to the efforts of the operations and field marketing teams both in Atlanta and at Brand Central, including Al Hodges, Pam Randolph, Michelle Stasiukevicius, John Carpenter and Brandy Zimmerle.”

Even before the Cherokee County Board of Health was able to give the truck a permit to sell coffee, they were already giving it to emergency responders in the area. Three days after the truck arrived, White says, they were serving coffee, donuts and sandwiches. 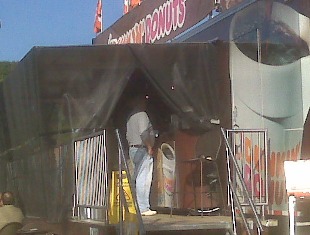 Dunkin' Is Open For Business!

“Customers have been thrilled because there isn’t much open around here right now. Thanks to the signs they put up and word-of-mouth we did $2,000 in sales this past Sunday,” said White.

The floods have disrupted normal life in the area but White says, having fresh, hot Dunkin’ Donuts coffee available has made surviving the disaster a little easier.

Dunkin’ Brands has also worked with various vendors to get them to donate time and materials to help White get back on his feet. He expects to re-open the Highway 92 location by the end of year and he’s looking at whether it makes sense to do a complete remodel before reopening the Towne Lake Parkway location.

DDIFO president Jim Coen stopped in to see White right after the supertruck got up and running. “I was amazed at the customer response. Everyone was thanking Mike for being there; they were so appreciative,” said Coen.

“The one thing I’m glad about now is that there’s cash coming in so I can pay my employees. We are making every effort to make sure all full time employees can get some money coming in and the Brand said they are looking at ways to help those employees who were especially impacted by the flood,” White said.

Since the rains first started falling White has been working non-stop. He says the situation is going to set him back for a while but he’s optimistic he’ll get back on his feet, especially because he’s received so much support from so many people.

Before he opened his first Dunkin’ shop, White was a career military man. He was drafted into Vietnam but rose to the rank of Major and retired as a test pilot for the U.S. Army. He says he learned a lot in his 22 years in the military including this: “What doesn’t kill you makes you stronger.”