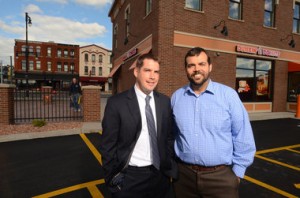 A Dunkin’ Donuts that actually meshes with its surrounding neighborhood: Ben Walsh, deputy commissioner for business development in Syracuse, and Dominic Robinson, director of the Northside Urban Partnership, see the new restaurant as a model for citywide development

Sean Kist of the Post-Standard reports that there are many quiet reasons to be happy about a new Dunkin’ Donuts at North Salina and Division streets in Syracuse. The place is a reminder of why urban design matters, and it demonstrates what can happen when you bring together concerned merchants and a developer who listens.

Most important, it serves as a kind of memorial to Richard Wiese Jr., a relentless and tenacious neighborhood advocate.

“Oh, yeah,” said his widow, Betty Wiese, owner of the Lewis Uniform Co. on the North Side. “He always enjoyed a good fight.”

Rich Wiese, who at 63 died unexpectedly in January, was chairman of the Greater North Salina Street Business Association. For years, the members looked with longing at the empty lot at North Salina and Division. They’ve always believed North Salina has a business district of unusual historical integrity, and with the right energy — and the right investment — it could be a vibrant hub.

So the association grew worried when it learned the Wolak Group — a Maine company that’s built about 80 Dunkin’ Donuts restaurants — intended to put one up on the corner. “We’d been hoping for a three-story building there, with underground parking,” Betty said. The immediate fear was that a traditional “big box” fast food joint would diminish the overall flavor of the street.

Yet the developer rejected a confrontational approach. Ben Walsh, deputy commissioner for business development in Syracuse, and Dominic Robinson, director of the Northside Urban Partnership, said the Wolak Group and its architect, Bob Abbott, offered a design that quickly addressed many concerns. The building, for instance, would be flush with the sidewalk — in the fashion of other old North Salina storefronts.

“We wanted it to have the look of a Dunkin’ Donuts, but we also wanted to fit into the area,” said Tom Santurri, Wolak’s vice president of operations and franchisees. Still, there were two sticking points when the idea went before the city Planning Commission. Neighbors called for residential units on the top floor, and they were concerned about a proposal to create a North Salina exit for a drive-thru window.