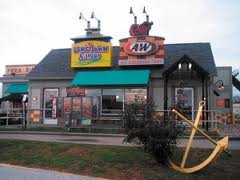 Bloomberg reports that Yum Brands Inc., which owns the KFC and Taco Bell restaurant chains, plans to sell its Long John Silver’s and A&W All-American Food Restaurants to focus on expansion in China and other regions.

The two brands account for more than 1,600 outlets, all of which are owned and operated by franchisees, Yum said. Yum, based in Louisville, Ky., has a network of more than 37,000 restaurants worldwide. The company also plans to sharpen its focus on the Taco Bell, KFC, and Pizza Hut chains.

“They just had a little trouble restoring the glory days of A&W,’’ said Jack Russo, an analyst at Edward Jones & Co. in St. Louis.

Yum bought Long John Silver’s and A&W for $320 million in 2002, giving the company five brands to use in various two-in-one and three-in-one combinations.